“For as long as I can remember I have always been one to latch on to anything positive, or negative, due to the rejection I experienced when I was a child,” said a young woman, reading from a crumpled sheet of paper, to a half-filled room on a rainy day in London. She was speaking at a session designed to raise awareness of the plight of women in prison, as part of a conference on feminism.

There was then silence, as she silently began to cry on stage.

“My story is one I never thought I’d survive and is a real story,” she continued. “I hope it will inspire people to want to change things for the better.”

The young woman, who has asked not to be named, was 17 when, as she says, she “met the wrong people through a close relative I trusted, but now I know I should not have.”

She was bullied into carrying kilos of cocaine to Barbados, given drugs, and raped.

Having been in a foster placement from the age of just 11, she had already been taught that her feelings did not matter. Early experiences of sexual assault made her accustomed to not being believed; instead, she was used to being left alone and ignored. It was not dissimilar to her experience of prison, where she would eventually end up.

When she arrived back at customs at Gatwick airport, she was arrested. She was barely given the chance to explain what she had been through, treated with scorn and blamed like a ringleader, despite her age, her lack of previous convictions, and a body visibly bruised by rape.

A bright college student who was studying to be an air hostess, she stood in front of grimly-faced airport officials more concerned about the drugs she had been carrying than the scars she bore.

Female prisoners account for just 5% of the total prison population, and serve on average, short sentences (long enough, however, to cause further disruption and chaos in their lives, and the lives of the many children affected by mothers in prison). It is these facts that make them easily ignored and often overlooked; a silent minority slipping from view.

Sometimes, we get a small glimpse into this terrifyingly unjust world when something so appalling happens, that public interest and outrage briefly boils over.

The tragic suicides of six women at Styal women’s prison in Cheshire between 2002 and 2006 led to the Corston Review, set up by Baroness Jean Corston in 2006. It is still regarded as the blueprint for prison reform today.

All six of the women died within one month of custody, and three of the six had a history of mental health problems.

The report listed a range of incidents that occurred in a typical ten-day period in a local women’s prison. Among them, a woman set fire to herself and her bedding. Another young woman, with a long history of self-harm, continued to open old wounds to the extent that she lost dangerous amounts of blood. A pregnant woman was taken to hospital to have early induced labour over concerns about her addicted unborn child. She went into labour knowing that the Social Services would take the baby away shortly after birth.

All this, was ‘typical’.

Even in 2012, Nick Hardwick, Chief Inspector of Prisons, found the plight of women inside Keller, the mental health unit at Styal, “more shocking and distressing than anything I have yet seen on an inspection.”

One of the report’s central recommendations was that custodial sentences should only be handed out for serial and violent offenders who pose a threat to the public, rather than locking away, often from their children, women who have committed non-violent offences. Estimates put the figure of serious violent offenders at 3% of the women’s prison population, which equates to around just 130 women.

More than half of female prisoners, 53%, have experienced emotional, physical, or sexual abuse as a child, compared to 27% of men. A similar figure report having been the victims of domestic violence.

“Most women in prison simply shouldn’t be there,” Jenny Earle of the Prison Reform Trust concludes, flatly.

A senior lawyer at the Equality and Human Rights Commission before she began to work for the Prison Reform Trust, Earle believes that incarcerated women are emblematic of women’s confined and marginalised position in society more generally.

“Women in prison are like a microcosm of the multiple disadvantage some women suffer, including many who have been victims of much more serious crimes than the ones they are accused of committing. I feel women have a lot on their shoulders and when they get into trouble, they attract a lot of blame and shame.”

Even when high profile female prisoners make the news, the reaction from the media is telling. When the so-called ‘Peru Two’ – Melissa Reid and Michaella McCollum Connolly – made the headlines earlier this year, there were tuts of indignation and remarks about how foolish these young, impressionable women had been.

No one bothered to consider the global drugs industry run by powerful male-dominated drugs cartels that operate largely without impunity, or the fact that the girls are now currently housed in a Peruvian jail cell with 38 other inmates.

Then of course, there was Vicky Pryce, the renowned economist who accepted points on her driving licence for her husband, the former politician Chris Huhne. Marital coercion and a bitter love triangle soon whipped the media into a furious frenzy, and an opportunity to elucidate the plight of ordinary women in prison was lost. Pryce was an atypical prisoner in the sense that her sentence will barely affect her future prospects. Thankfully, her book on her experiences, Prisonomics, will hopefully serve as a useful addition to the discourse of imprisoned women.

Despite public opinion polls that show support for more cost-effective solutions to non-violent offenders such as intensive community orders, Earle believes that there are pockets of public hostility towards female prisoners that originate from perceptions of womanhood, motherhood and femininity.

“Some people can be especially judgemental of women who offend because it upsets gender stereotypes, especially if they are mothers, and it has a big impact on families,” Earle says.

“There is some continued misunderstanding of the case we are making – we are not asking for women to be treated leniently or given an easy ride because of their sex – we are asking for proportionate responses, greater recognition of the different challenges that women face in society, and of the fact that the criminal justice system that has been largely designed with men in mind.”

Janes has worked with young women in prison for many years, many who are under 18, children themselves, and many who are pregnant.

She believes that women in prison are “absolutely” being failed: “Women and girls in the criminal justice system get a very raw detail. There are enormous rates of self-harm and exploitation of women in prison. These are very, very damaged girls.”

Women do, of course, commit violent crimes, and sometimes long sentences in custody are the only answer. But many more women do not belong in prison.

Women in prison have a long and chequered past. School history books teach students about the suffragettes and their prison hunger strikes. The strikes culminated in the brutal 1913 Prisoners (Temporary Discharge for Ill-health) Act, otherwise known as ‘Cat and Mouse’ tactics, releasing women from prison when they were at their most weak, only to re-imprison them again once they had recovered. Not so much Tom and Jerry, but a Tom transformed from a cartoonish, buffoonish kitty, into a powerful, menacing spectre, with sharp, bloody claws. The 1914 WSPU poster of a gleaming green-eyed cat with bloodied teeth sunk into a flailing suffragette leaves a chilling impression. 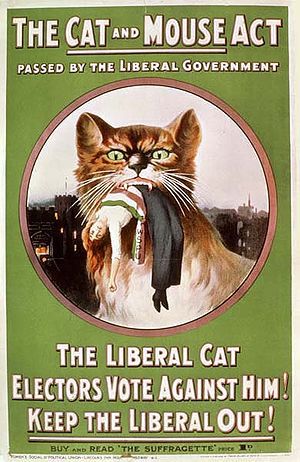 Of course, the suffragettes were political prisoners, fighting for the vote. Yet the conditions they endured while in prison and the total lack of women-specific services shows that in some ways, little has changed for imprisoned women.

We should not forget the suffragettes and the horrendous abuses they suffered, as they can teach us valuable lessons. Nor should we forget Elizabeth Fry, the prison reformer who helped imprisoned women and children at Newgate prison, and who challenged perceptions of prisoners forever. But this year, in the triumphant, giddy haze that surrounded the announcement that Jane Austen would be appearing on our £10 banknotes, we lost Fry. She will be replaced by Winston Churchill in 2016 on £5 banknotes, and despite the wonderful celebration there is to be had in gaining Austen, in losing we Fry, we risk losing sight of a desperately important issue.

In July this year, a ‘women’s amendment’ to the Offender Rehabilitation Bill was made, which now requires that women’s specific needs are taken into account in the provision of supervision and support services. But much more grassroots work is needed to prevent women from ending up in prison in the first place; women-specific services that provide access to safe housing, debt and financial advice, mental health services, and parenting support.

← The message and the music: why applauding any song with a feminist sentiment is dangerous
Author AM Homes: “We still live in a world where the work of male writers dominates” →