Can a naked woman ever be celebrated in the internet age? 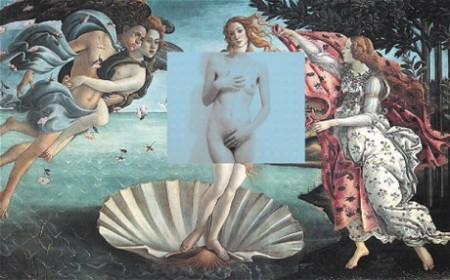 Probably not. Your mind is more likely cast to seedy crevices of the internet, where camgirls, (also often unpleasantly described as ‘camwhores’ and ‘camsluts’) usually advertise their (bare) wares for murky cyberspace’s male punters.

Well thanks to 21-year-old former London College of Fashion student Vanessa Omoregie, this perception of camgirls could be about to change.

Omoregie’s tumblr blog, Camgirlsproject, invites any woman to copy the pose of a nude from a famous painting on a webcam and send it to her. She then merges the original painting and the webcam image to create some quite visually startling works.

“The name has connotations of its own,” she says. “The project hopefully makes people rethink what they know about the term and how they view girls who choose to be in front of a camera  – sexual or not.”

However, it hasn’t all been plain-sailing. “It’s been a lot of explaining,” Omoregie tells me. “Explaining that I’m not stealing pictures or pulling pictures of girls off random sites. These are real girls who want to contribute to what the project discusses.”

The response from the women involved in the project has been telling. Some have thanked Omoregie for giving them a platform to do something slightly risqué, while others have expressed doubt that their body is the ‘right’ sort of body to be included on the site, which Omoregie finds sad. Some have criticised Omoregie purely on an artistic level and others have praised her for turning Victorian masterpieces painted by men, into modern updates, commissioned and directed by women.

While Omoregie is quite happy for participants and spectators to bring their own interpretations to the project, she is adamant about one thing: the men who are affronted by it. “Guys who are offended by it, or don’t get it – I find them really interesting, because the project has nothing to do with them really. Maybe that’s what they find so offensive.”

There is also a glaring problem with the project. An almost complete reflection of the subject matter of the originals, the modern day nudes are mostly pale, nearly all white, and have stereotypically ‘good’ bodies (skinny, hairless – you know the drill). Omoregie, herself a black woman, is disappointed, although she has herself participated in the project and is proactive in trying to encourage more women to join in: “I was hoping that women who are not usually represented by the media would see this as a way to get their voice out there,” she says.

Omoregie claims that the project is simply a creative experiment, and she confesses she is “shaky” on feminism because it “comes with a lot of baggage” (although she does describe herself as one). Yet the blog undeniably deserves a firm place in today’s discourse on female sexuality, the internet and the ‘selfie’ generation: the question of whether a naked woman in the public sphere can ever be celebrated, just as Velazquez’s The Toilet of Venus is. With debates raging over The Sun’s Page Three, lads’ mags, and even Femen’s new brand of militant, topless feminists; can taking your kit off ever be a good thing?

It can. Rather than it reinforcing the idea that women are simply the sum of their body parts or little more than sex objects, the project is a way of almost reclaiming female nudity, re-appropriating it as something to be proud of, and artistic, rather than something smutty, or shameful.

One woman who contributed to the project later regretted her decision, and Omoregie took down her photo. She tells me that half the time it is the discussion about why women do, or do not want to take part, which fascinates her the most.

← POET JOHN HEGLEY: “I WAS JUST A BIT ODD WHEN I WAS AT SCHOOL”
The message and the music: why applauding any song with a feminist sentiment is dangerous →