POET JOHN HEGLEY: “I WAS JUST A BIT ODD WHEN I WAS AT SCHOOL” 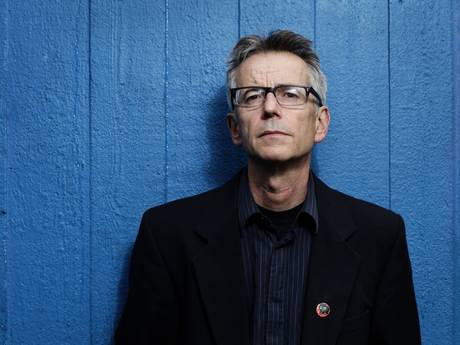 John Hegley, one of the country’s  most popular contemporary poets, is absent-mindedly picking the cat hairs off his shabby suit. His Converse trainers have holes in them, and the photographer is reminding him to stand up straight. As Hegley is demonstrating a cross between a Tai Chi move and a 16th-century Baroque dance, this is proving rather difficult.

The famously eccentric and very funny Hegley turns 60 on Tuesday, although he looks much younger. On Thursday he will perform at London’s Southbank Centre to celebrate National Poetry Day. It’s a busy time – two new books are about to be published; a children’s poetry book, I am a Poetato, and New and Selected Potatoes, a collection of new works and past favourites.

Aside from potatoes, which are a central feature of his poetry, Hegley is probably most associated with Luton, where he grew up. He now lives innorth London with his girlfriend. Last year, Hegley was writer in residence at Keats’s House in Hampstead. “I fell in love with Keats,” he says. “He’s very playful. People don’t think of Keats as playful, but I discovered he had sword-fighting matches with his landlady – with celery batons. So last year during the Olympics we held the Vegetable Olympics in his house. We had celery sword-fighting, passing the carrot baton and a ‘flicking the fennel from the flannel into the funnel’ event.”

Hegley is a consummate wordsmith; his poems stand on their own as well as in performance, and he is a regular at Edinburgh’s Fringe festival. Yet his work is not as light as it is sometimes portrayed. His latest collection reveals poems that are often intellectually satisfying, sometimes didactic, and poignant, not just clever wordplays.

There are many poets that Hegley cites as his favourites; among them Seamus Heaney, Carol Ann Duffy (a “fantastic” poet laureate), and D H Lawrence, and many more are referenced in his poems. In A Lean Towards the Light, William Wordsworth eats his porridge with honey rather than sugar, a small gesture marking his opposition to the slave trade. Hegley compares this to his own, modest act of philanthropy – recycling. He is also a great fan of John Cooper Clarke, who similarly fuses poetry and humour, and who has had a considerable effect on performance poetry and modern music (Cooper Clarke’s poem I Wanna Be Yours has just appeared on the Arctic Monkeys new album). “I remember reading in the NME in the late seventies that this new bloke was on the scene who wrote poems that people could relate to and I thought, ‘Yeah, this is absolutely fantastic’.”

Hegley himself is a musician, and describes the two sessions he recorded for John Peel’s Radio One show with his band, the Popticians, as the apex of his career. “He told us how we’d made him laugh out loud. There’s no further you can go than playing on the street one minute, to John Peel saying you are excellent the next.”

Many of Hegley’s poems feature his father, often portrayed as a severe disciplinarian. Hegley’s 2003 poem, The Sound of Paint Drying, reads: “The picture I usually paint of my father / is the one of him smacking me as a lad: / hard and uncompromising.”

“I used to drive him mad,” Hegley tells me quietly. “I really, really pushed him, and he used to go over the edge.

“But he loved me as well. He always encouraged me, he kept my drawings. I once sang a song to him and he said he would call up Hughie Green and get me on Opportunity Knocks. I think I’ve been able to make a go of my creativity that would make him glad.”

Hegley’s grandmother, a Parisian dancer with the Folies Bergère, also appears throughout his poems, and he is fascinated by his French ancestry (citing Eric Cantona and Joan of Arc as two of his personal heroes). “Grandma is the exotic gem in our family,” he says fondly, and it is clear she has been a strong influence.

In an imagined letter to a young Hegley, she chides him for his awful artwork and for not being braver with a girl he likes at school: “In French we say tu me manques: you are missing to me. The beloved is put first and not the self. Put the beloved first,” she urges. “But,” the letter flatly concludes, “do not bother to enclose any of your drawings.”

Throughout our interview Hegley’s mood slips between thoughtful, solemn and pained. “I would say I have the ability to be funny, but I wouldn’t say I am just funny,” he says. In the past, he has been vocal on topics such as the invasion of Iraq, something that made him feel “helpless”. Is it his duty as a poet to engage with issues like war? “No,” he says forcefully. “Most of the time I think – just get on with your job. But Iraq felt wrong. It felt wrong to create more terror. We should always ask, well, what are the alternatives?

“But I can’t say that under no circumstances would I be against armed conflict – I can’t. Look at the Second World War. Or Yugoslavia. I’m so ill-equipped to talk about these things, but it seemed as though that was a good response, or an effective response. It seemed reasonable.”

Would he describe himself as a misfit? “Yeah, I probably am. Yeah,” he says, as if he’s never considered the question before. “Maybe misfit isn’t quite right,” he muses, “but certainly not easy fit. There was a boy at school, and when we had a debate he would address the class, ‘ladies, gentlemen – and Hegley’, which was quite wounding.

“I was just a bit odd,” he says cheerfully. “I remember singing with gusto in the school choir on the first day, and the boy next to me said, ‘You don’t get medals for singing here, mate’.” Luckily for Hegley fans everywhere, the incident hasn’t proved much of a deterrent.

← Frances Ha – review
Can a naked woman ever be celebrated in the internet age? →